Your Guide to Australian Slang for QIP Sydney 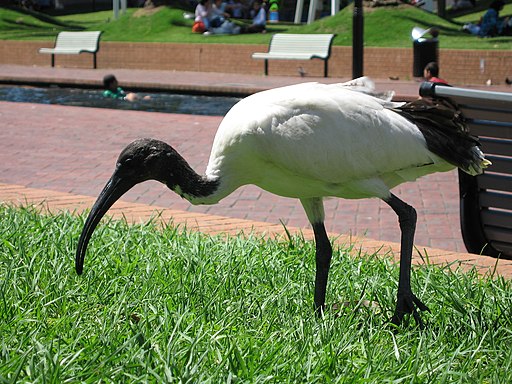 To everyone that’s attending QIP, welcome to Sydney!

Since I’ve already had to clarify a number of the finer points of Australian slang to my fellow attendees, I thought I would solve the general problem and simply post a helpful dictionary that translates some uniquely Australian words and usages into standard American English.

Also, this thing on the right is called an ibis. It’s not venomous.

Flat white – Try this at least once while you’re here, preferably prepared by a highly skilled barista at one of the better cafes. It’s similar to a latte or to a cappuccino without the foam, but there are important differences.

Long black – Australian version of the Americano, a bit stronger and with crema. It’s the closest you’ll get to a cup of filtered drip coffee, if that’s your thing.

Short black – If you want a standard espresso, order a short black.

Thongs – Sandals, or flip-flops. The highest level of dress code in Australia is “no thongs”.

Esky – A cooler; the place where you store your beer to keep it cold while you’re getting pissed at the beach.

Pissed – Drunk; the state that a nontrivial fraction of people are in because it’s legal to drink at the beach.

Mozzy – Mosquito. Usually not a problem at the beach because there is almost always a breeze.

Jug – A pitcher of beer.

Shout – To buy a beer for someone, or a round of beers for your table.

Skol – To chug a beer. Usage: “Hey Robbo, if you skol that schooner I’ll shout you a jug.”

Hotel – In addition to the standard meaning, a hotel is a particular style of pub. It usually has high occupancy and a limited beer selection (though this is starting to improve as craft beer is finally catching on here).

Footy – Rugby. It comes in several varieties, with League and Union being the two most popular varieties.

Gridiron – American football. Not generally watched much down under.

Cricket – An inscrutable game that takes 5 days to play. I think the only way you could like this game is to have the British invade, conquer your land, and occupy your territory under their colonial yoke for at least a few generations. That seems to be how everyone else got into it.

Rooting – Do not make the mistake of saying that you are “rooting for team X”; in Australia, rooting is slang for having sex.

Fair dinkum – The closest translation is probably “for real”. It’s used to express the sentiment that you’re not deceiving the listener or exaggerating your claims.

This entry was posted in Go Ahead, Waste Your Time. Bookmark the permalink.

8 Responses to Your Guide to Australian Slang for QIP Sydney